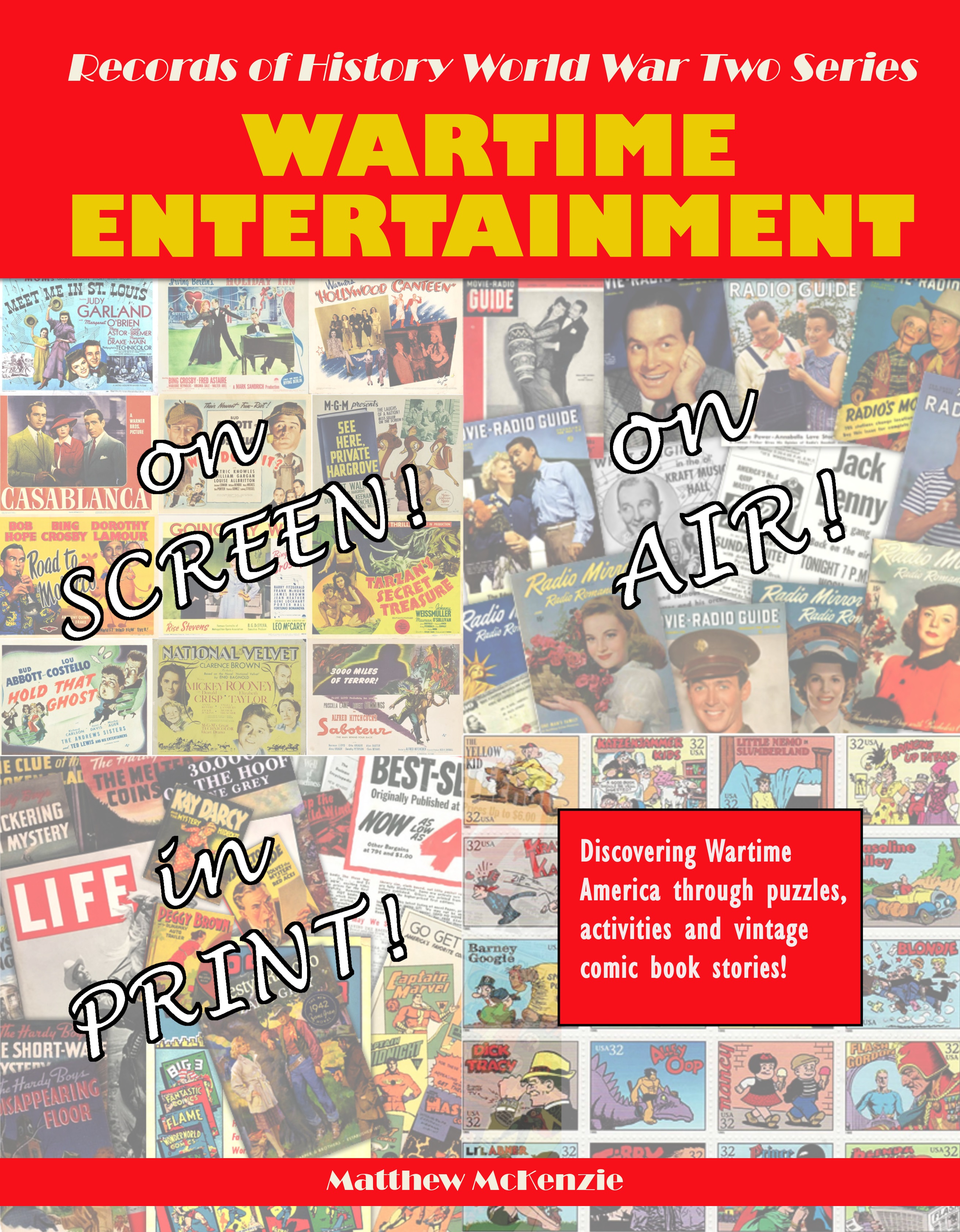 During World War II on the home front, Americans continued to enjoy their favorite forms of entertainment and pop culture. Entertainers and news commentators alike became household names as millions of people tuned in daily to listen to their favorite radio programs as well as catching up on the latest war news. Comic books sold by the millions every month, and Hollywood produced thousands of films during the war years. In this book, you will have the opportunity to survey some of the most popular forms of wartime entertainment that occurred on screen, on the air, and on the printed page! Available for purchase on Amazon. 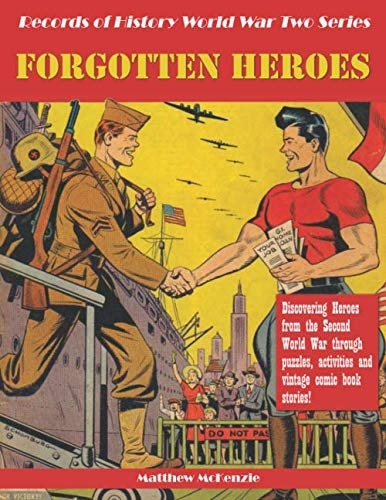 There were some heroes whose names were well-known in the United States during World War Two, such as Captain Marvel, Superman, Spy Smasher, Captain America, and many more. While some of these names are familiar to audiences today, the wartime contributions of many of them have been mostly forgotten. There were also millions of heroes whose names were familiar only to local hometown friends or family, but they were heroes nonetheless. As you work through the puzzles and activities in this book, perhaps you will also consider searching your own family’s records to discover more “forgotten heroes” of World War Two! Available for purchase on Amazon. 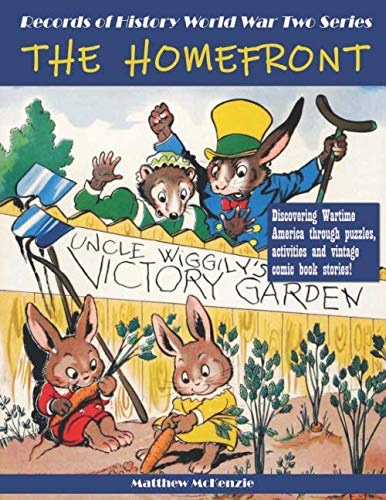 Shortages, rationing, defense stamps, bond rallies, scrap paper collecting, salvage drives, blackouts, victory gardens – all were a part of life in America during World War Two. Children were quite aware of the changes around them, as indeed, the daily life of every American household was impacted by the war. Families corresponded with sons and brothers serving in uniform. Parents worked in defense plants, or volunteered in various community organizations and teachers helped elementary school students to keep up with world events. Packed with puzzles and activities to explore life in wartime America. Available for purchase on Amazon. 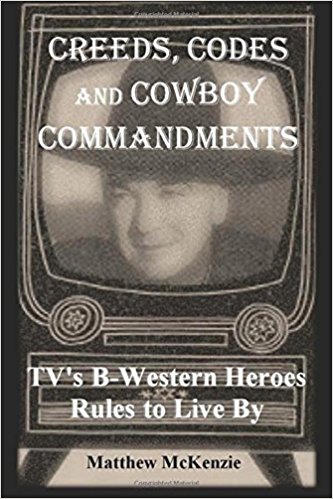 “Creeds, Codes and Cowboy Commandments” explores the moral basis that helped TV’s B-western stars lay claim to their cultural status of hero and role model. Through sample stories and dialogue within the episodes of their respective TV series, each western hero can be seen living out the values they had presented in their own personalized and published version of the “Code of the West.” Revisit those thrilling days of morals-packed adventures with your favorite heroes of the Old West in Creeds, Codes and Cowboy Commandments: TV’s B-Western Heroes Rules to Live By. Available for purchase on Amazon. 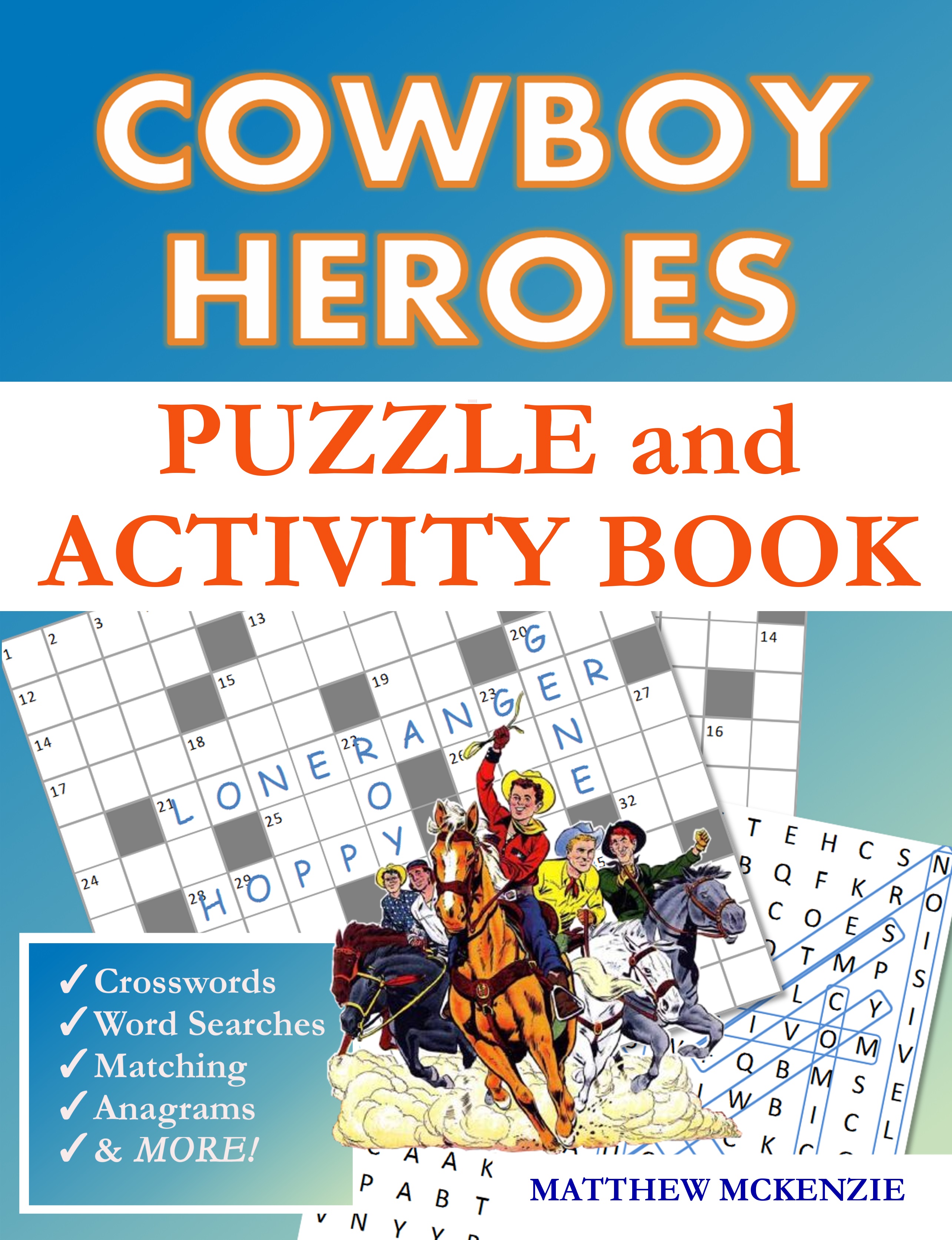 The TV-western themed puzzles and activities in Cowboy Heroes Puzzle and Activity Book offer hours of fun, while providing a chance for westerns fans of all ages to learn more about the cowboy heroes from the golden ages of television and comic books! Available for purchase on Amazon. 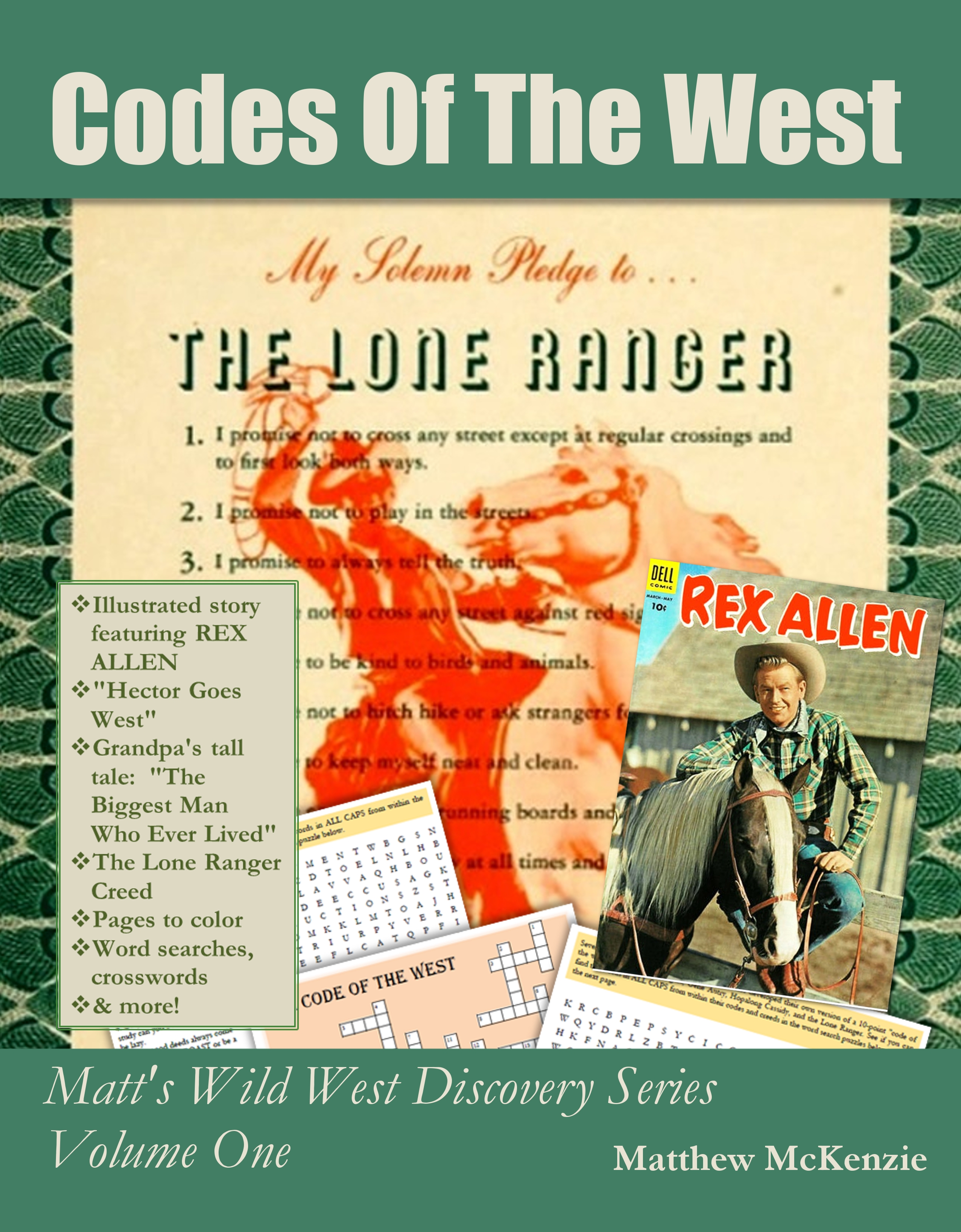 Codes of the West: Matt’s Wild West Discovery Series Volume One includes learning activities and puzzles around the theme of the code of the west. Most of the heroes in the fictional stories of the Old West were heroes because they adhered to the values commonly expressed in the Code of the West – including iconic heroes like Roy Rogers, Gene Autry, Hopalong Cassidy and the Lone Ranger. Also included is a vintage comic book story reprint of Rex Allen. Available for purchase on Amazon. 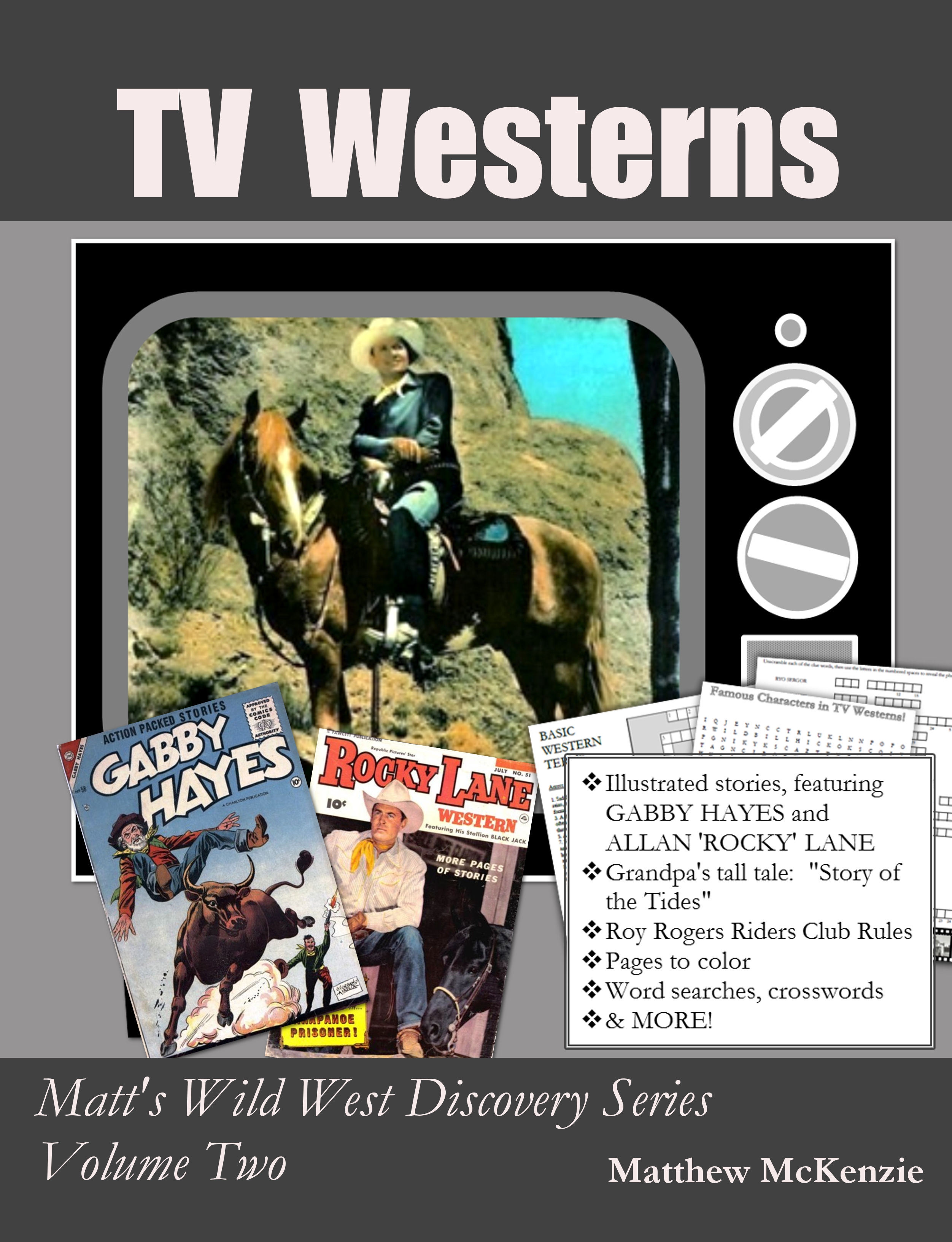 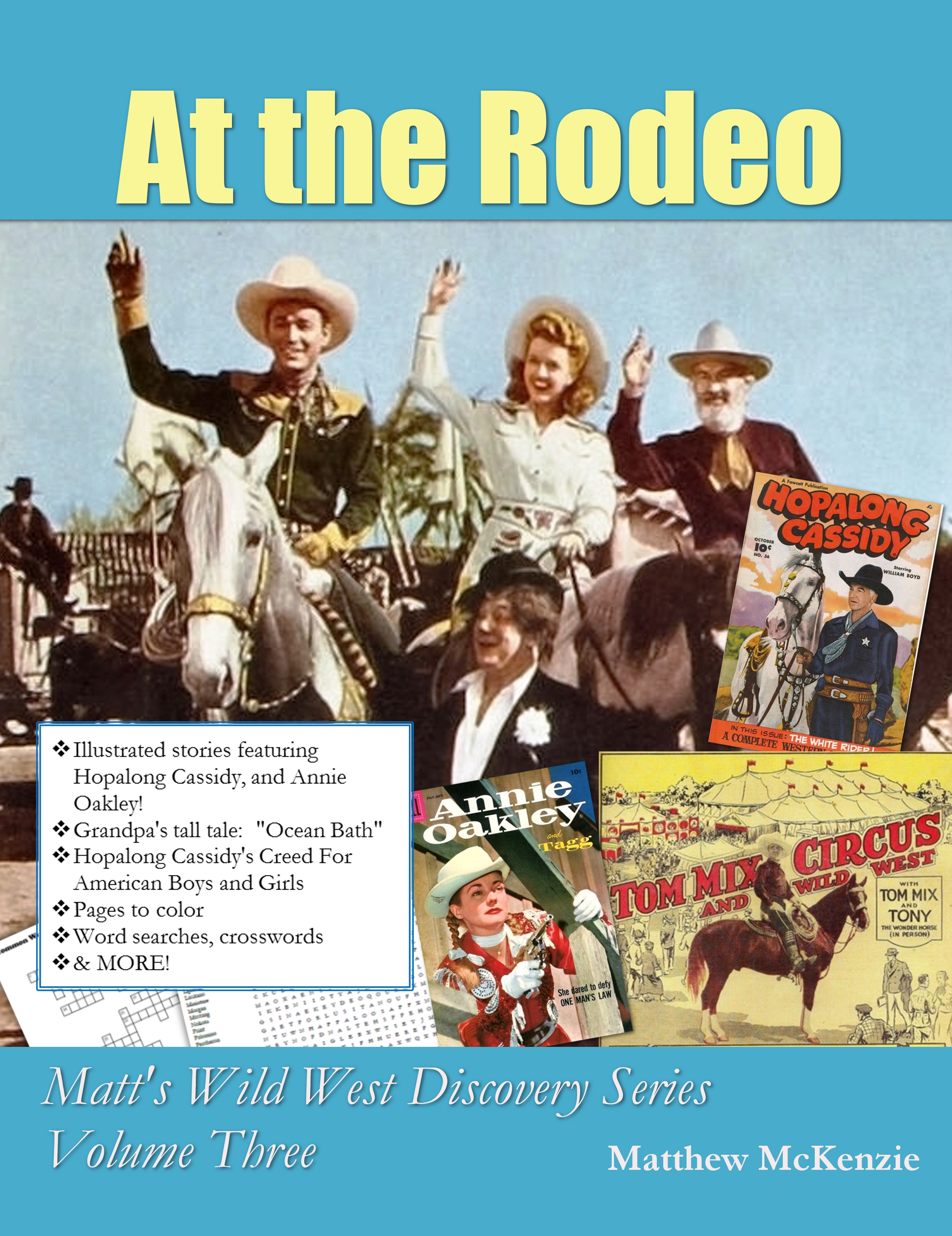 At the Rodeo: Matt’s Wild West Discovery Series Volume Three provides learning activities and puzzles about the western rodeo and the circus cowboys of a century ago. Also included are vintage reprints of comic book stories featuring Annie Oakley and Hopalong Cassidy. Available for purchase on Amazon. 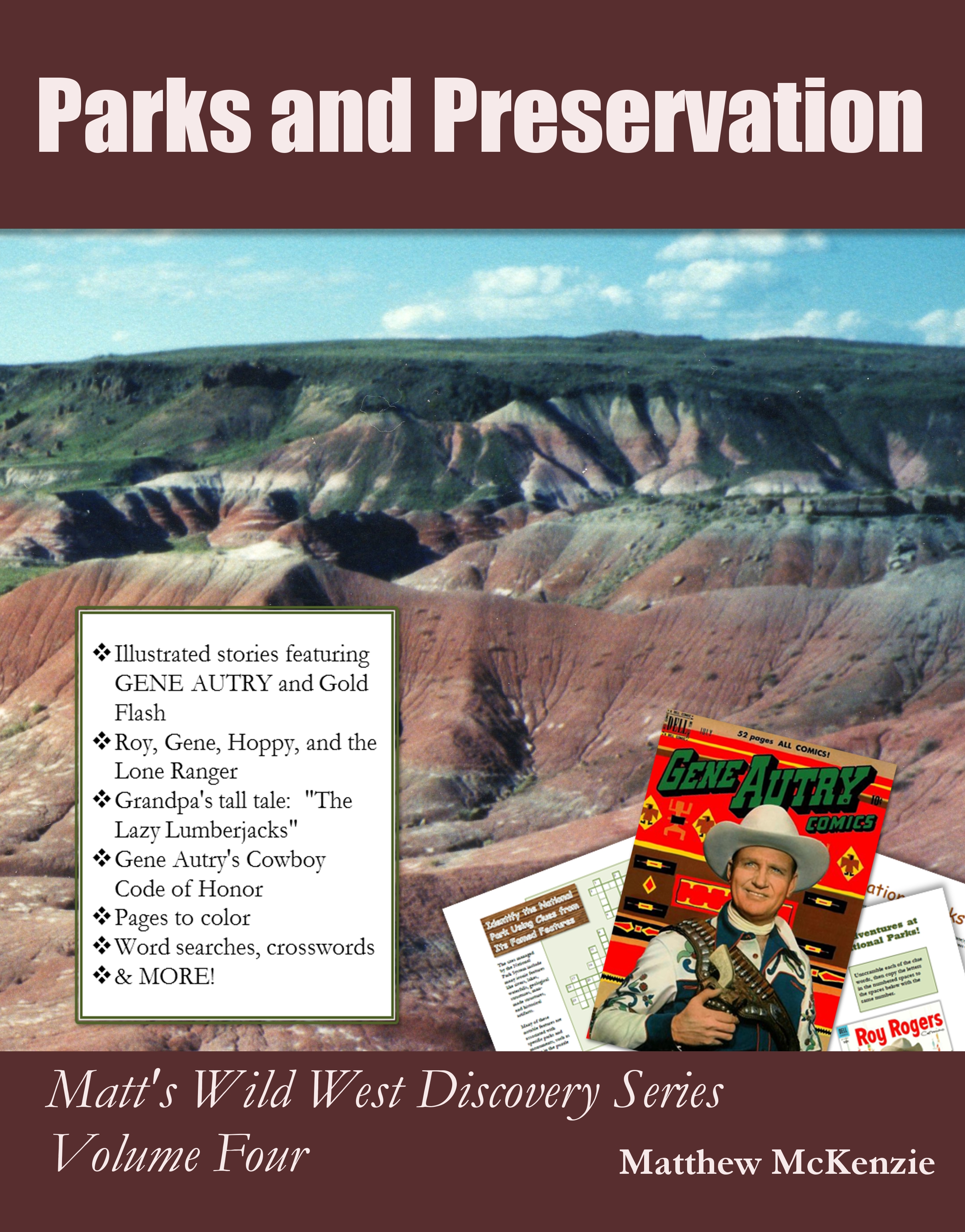 In Parks and Preservation: Matt’s Wild West Discovery Series Volume Four, you will have an opportunity to see how western stars like the Lone Ranger, Roy Rogers, Hopalong Cassidy and Gene Autry contributed to the cause of conservation and preservation. There are also several activities and puzzles to complete that are designed to introduce some of the many wonderful parks and recreation areas available in the western regions of the country. Available for purchase on Amazon. 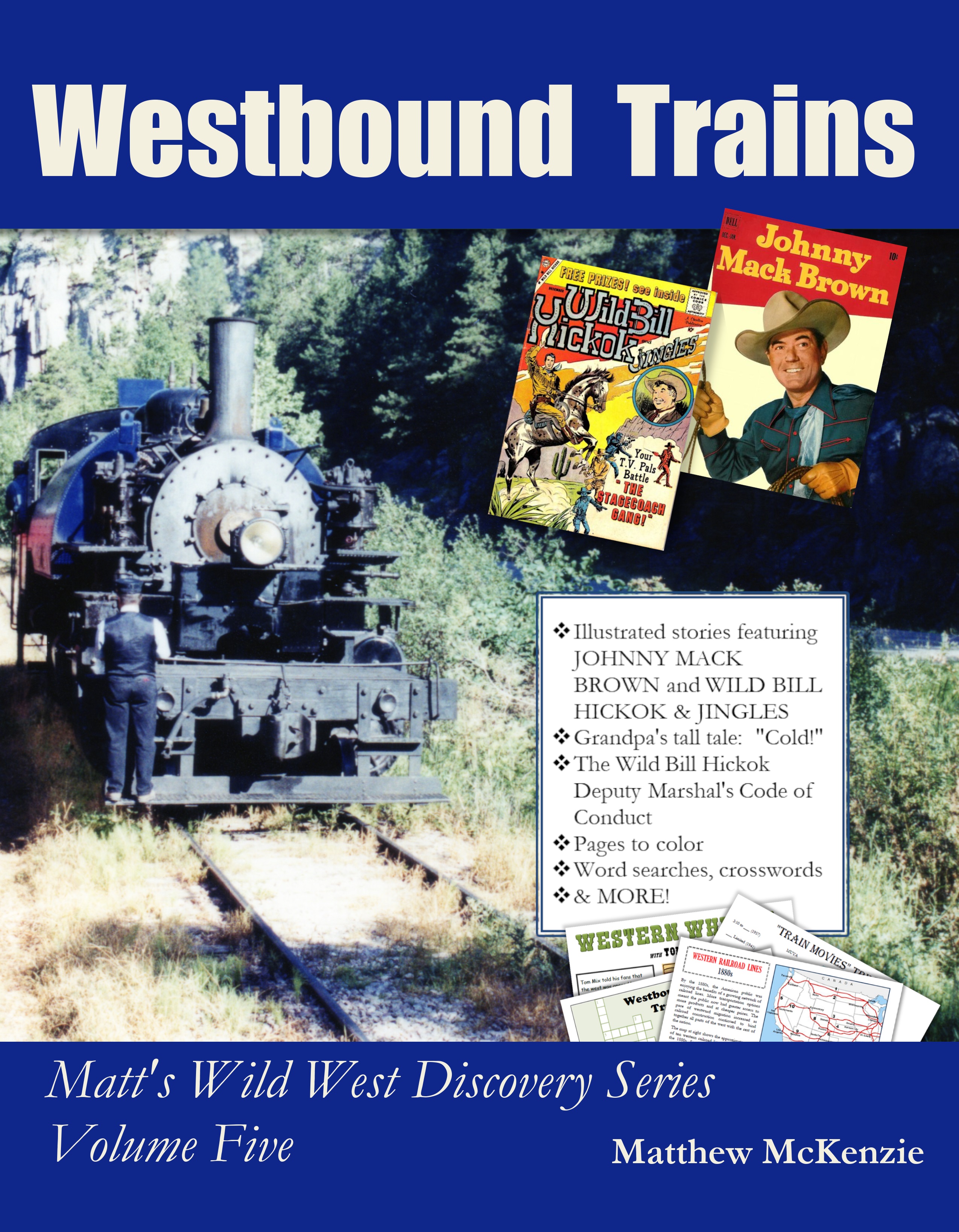 Wagon trains and railroads played critical roles in the rapid development of the American West and, subsequently, in the story lines of countless western novels, films, TV shows, radio programs, and comic books throughout the 20th Century. In Westbound Trains, the fifth volume in the Matt’s Wild West Discovery Series, there are activities and puzzles that are designed to increase one’s familiarity with the historic railroads and the highway system that is so critical to modern commerce in the West. Also, we highlight the 1950s TV and radio programs of Wild Bill Hickok along with a presentation of his 9-point Deputy Marshal’s Code of Conduct. Available for purchase on Amazon.

With the prospects of mining gold and silver in the latter half of the 1800s, multitudes of people left home and family in the East looking to make their fortune out West. In “Gold Rush Days”, the sixth volume in the Matt’s Wild West Discovery Series, there are activities and puzzles that are designed to increase one’s familiarity with the role played by the discovery of these precious metals in the development of the American West. Also, we highlight the 1950s TV and radio programs of Tales of the Texas Rangers along with a presentation of the 10-point Texas Rangers “Deputy Ranger” Oath. Available for purchase on Amazon. 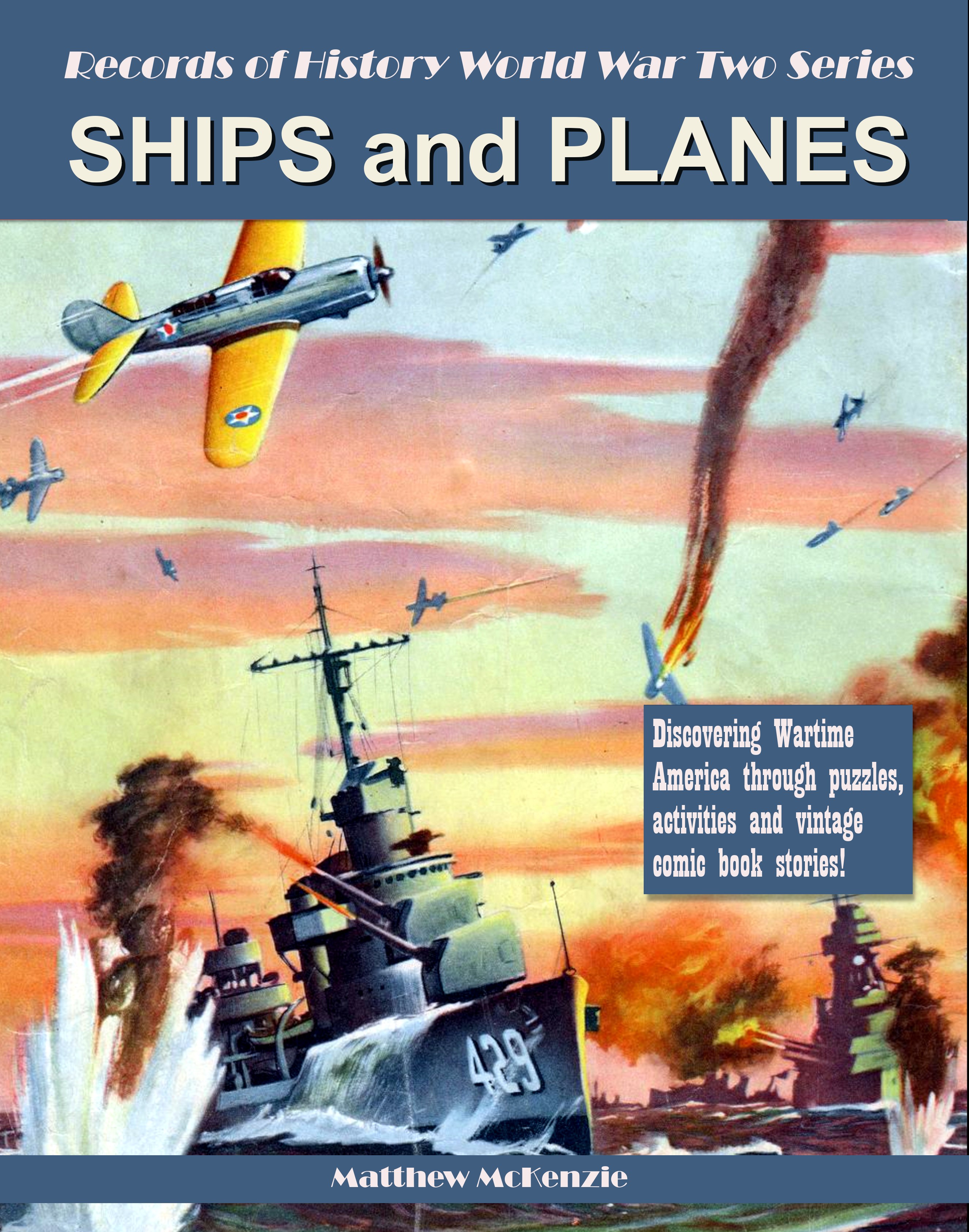 Fast fighter planes, long range bombers, submarines, and aircraft carriers were just some of the newer machines of modern warfare that came to prominence during World War II. The puzzles and activities in this book, Records of History World War Two Series: Ships and Planes, will provide an opportunity to sample some of the information and stories available to young readers of wartime comic books from which they learned about these fascinating ships and planes! Available for purchase on Amazon. 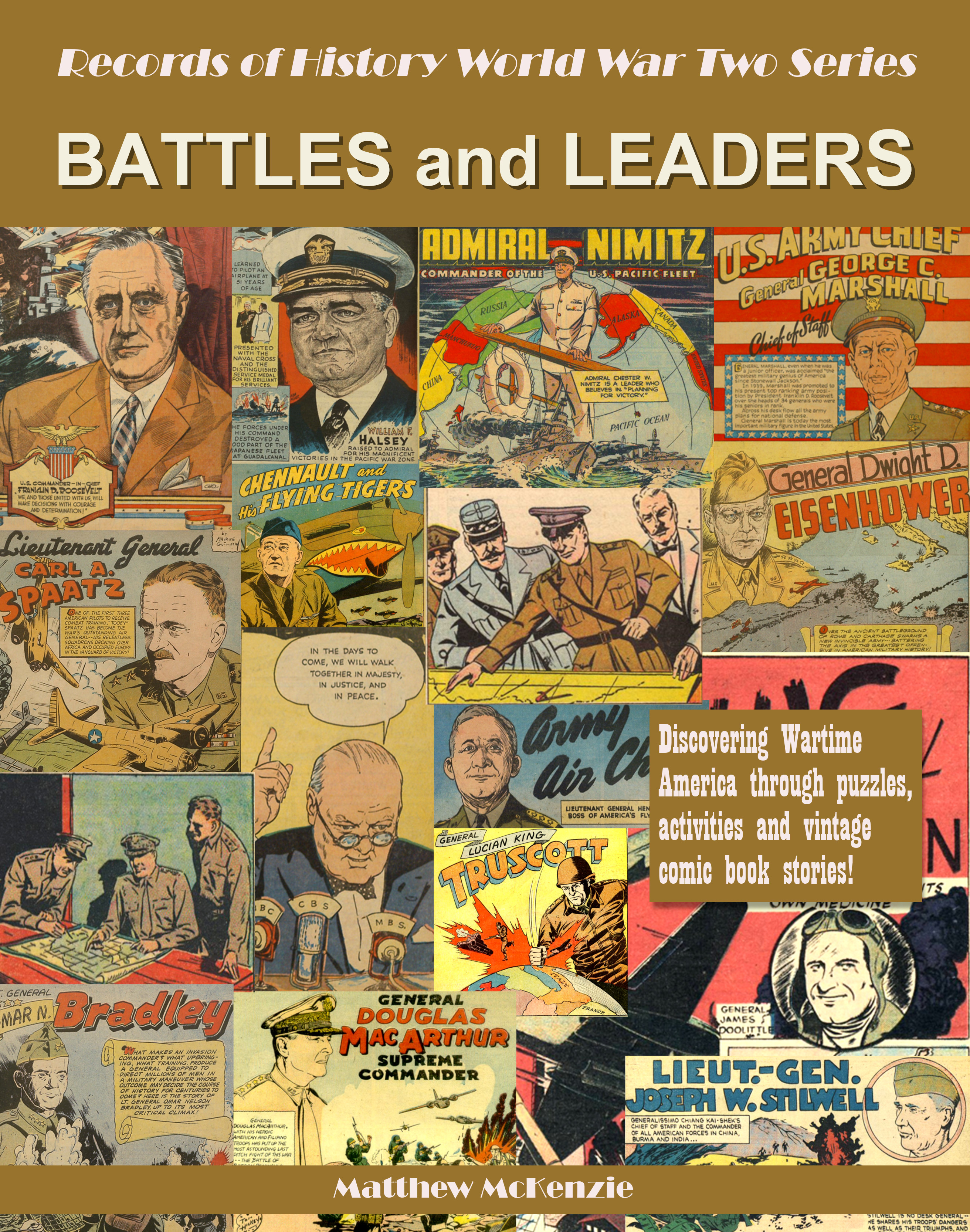 World War II was fought on a global scale and thus produced many memorable events and dozens of leaders whose names became familiar to all Americans. The puzzles and activities in Records of History World War Two Series: Battles and Leaders provides opportunities to rediscover some of the war’s biggest stars and most famous battles. Effective leadership in the areas of politics, the military, science, and industry were a vital key to victory for the Allies. Available for purchase on Amazon.